Last Sunday, I spent the afternoon at Photoville, a nine-day annual photography festival that takes place in New York City’s Brooklyn Bridge Park and numbers more than 60 photographic exhibits, most housed in shipping containers stacked two layers high. It’s a lot of visual imagery and storytelling to absorb in just a few hours so I quickly surrendered to getting a contact high via quick ins-and-outs at the booths, and interspersing slightly longer visits with picture taking of my own.

Below are links to some of the work that deeply touched me or made a strong impression:

Immigration along the southern U.S. border is seen from an entirely new perspective that uses traditional Christian iconography to dramatize the immigrant experience. It’s one thing to label those who make this dangerous journey illegal aliens, another to imbue their suffering and sacrifice with the nobility and universality of their aspirations. Imagine how different the national immigration debate would be if pictures like the one below accompanied the headlines: 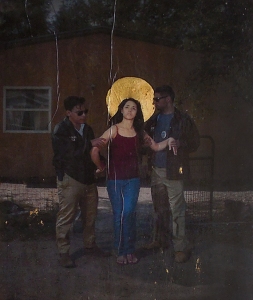 This ongoing Time magazine project follows three refugee families with newborns struggling with uncertain futures while at the mercy of overcrowded camps in Greece and a dispassionate asylum process. What can the parents offer a child who has just come into this world? A movie trailer shown at Photoville presents the gravity of their circumstances in stark relief.

A CLIMATE FOR CONFLICT  |  Nichole Sobecki

I photographed Nichole thinking she was just another visitor taking a break outside a container exhibition. Unsure if she was OK with having her picture taken, I showed her what I had done. Only then did I discover she was an American photojournalist based in Nairobi and that her work was on display just inside the door.

I have the utmost admiration for the courage and artistry of photographers like her who forgo lives of comfort to cover stories that would otherwise be ignored. Her film, A Climate for Conflict, shows how drought and other Ethiopian environmental issues have resulted in widespread famine and new recruits for terrorism. As tragic as its subject is, the story is beautifully told with great sensitivity and power. Be sure to check out another of Nichole’s films at the same link, Child, Bride, Mother: Nigeria.

This Dutch photographer has become known for her intricate photomontages, and cultural interpretations that are a seamless blend of art and photography. Shadows of Pakistan, combining Islamic medieval miniature paintings with contemporary images of Pakistani scenes and citizens, was my introduction to her work. By infusing the present with centuries past, Wielinda creates a new reality rich with the depth and complexity of human experience.

This project is based on collaborations between convicts in long-term solitary confinement and individual photographers who create images based on requests that the prisoners make. As one might expect, the photographs cover a wide range of subject matter, reflecting the needs and desires of human beings deprived of minimal social contact.

This site uses Akismet to reduce spam. Learn how your comment data is processed.